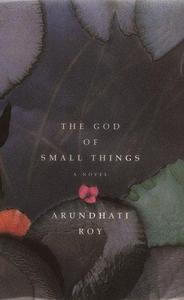 The God of Small Things

The God of Small Things is the debut novel of Indian writer Arundhati Roy. It is a story about the childhood experiences of fraternal twins whose lives are destroyed by the "Love Laws" that lay down "who should be loved, and how. And how much." The book explores how the small things affect people's behavior and their lives. It won the Booker Prize in 1997. The God of Small Things was Roy's first book and only novel until the 2017 publication of The Ministry of Utmost Happiness twenty years later. She began writing the manuscript for The God of Small Things in 1992 and finished four years later, in 1996. It was published the following year. The potential of the story was first recognized by Pankaj Mishra, an editor with HarperCollins, who sent it to three British publishers. Roy received £500,000 in advance and rights to the book were sold in 21 countries. In 2013, Talkhiyaan, a Pakistani television series based on the novel, was aired on Express Entertainment.
Read more or edit on Wikipedia

original title: The God of Small Things
date of publication: 1997
genre: novel
followed by: The Ministry of Utmost Happiness