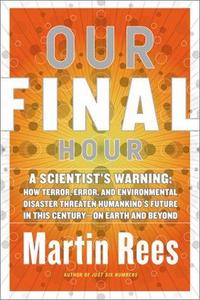 Our Final Hour is a 2003 book by the British Astronomer Royal Sir Martin Rees. The full title of the book is Our Final Hour: A Scientist's Warning: How Terror, Error, and Environmental Disaster Threaten Humankind's Future In This Century - On Earth and Beyond. It was published in the United Kingdom under the more prosaic title Our Final Century: Will the Human Race Survive the Twenty-first Century?. The premise of the book is that the Earth and human survival are in far greater danger from the potential effects of modern technology than is commonly realised, and that the 21st century may be a critical moment in history when humanity's fate is decided. Rees discusses a range of existential risks confronting humanity, and estimates that the probability of extinction before 2100 CE is around 50 percent, based on the possibility of malign or accidental release of destructive technology.
Read more or edit on Wikipedia