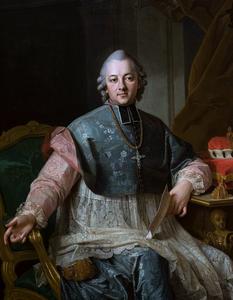 Ignacy Błażej Franciszek Krasicki (3 February 1735 – 14 March 1801), from 1766 Prince-Bishop of Warmia (in German, Ermland) and from 1795 Archbishop of Gniezno (thus, Primate of Poland), was Poland's leading Enlightenment poet ("the Prince of Poets"), a critic of the clergy, Poland's La Fontaine, author of the first Polish novel, playwright, journalist, encyclopedist, and translator from French and Greek. His most notable literary works were his Fables and Parables (1779), Satires (1779), and poetic letters and religious lyrics, in which the artistry of his poetic language reached its summit.
Read more or edit on Wikipedia