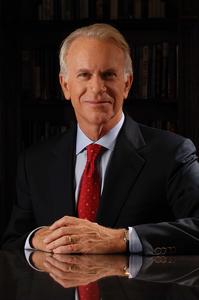 James Kenneth Glassman (born January 1, 1947) served as Under Secretary of State for Public Diplomacy and Public Affairs from 2008-2009. He was, from 2009 to 2013, the founding executive director of the George W. Bush Institute, a public policy development institution focused on creating independent, nonpartisan solutions to America's most pressing public policy problems through the principles that guided President George W. Bush and his wife Laura in public life. The George W. Bush Institute is based within the George W. Bush Presidential Center on the campus of Southern Methodist University in Dallas.Glassman has also worked as a journalist, magazine publisher, and business writer, and in the field of economic policy development. He is perhaps best known for co-writing the book Dow 36,000 (published 1999), in which he predicted that the Dow Jones Industrial Average would approximately triple in value to 36,000 points by early 2005; as of 2020, more than twenty years after his book was published, the Dow has yet to reach 36,000. Presently, he is chairman of Glassman Enterprises, LLC, a Washington, D.C.-based public affairs consulting firm whose clients include several Fortune 100 companies in fields including health care and energy. In 2003, the Washington Monthly credited Glassman with inventing "journo-lobbying" by writing a large number of seemingly independent opinion columns that aligned closely with the interests of his lobbying clients; his output included columns that questioned the science behind climate change.
Read more or edit on Wikipedia