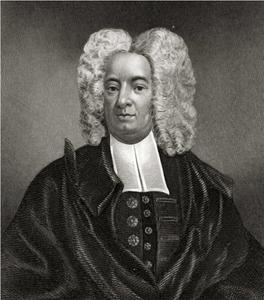 Cotton Mather (February 12, 1663 – February 13, 1728) was a New England Puritan minister and a prolific author of both books and pamphlets. One of the most important intellectual figures in English-speaking colonial America, Mather is remembered today chiefly for his Magnalia Christi Americana (1702) and other works of history, for his scientific contributions to plant hybridization and to the promotion of inoculation as a means of preventing smallpox and other infectious diseases, and for his involvement in the events surrounding the Salem witch trials of 1692–3. He also promoted the new Newtonian science in America and sent many scientific reports to the Royal Society of London, which formally elected him as a fellow in 1723. A controversial figure in his own day, in part due to his role in supporting the Salem witch trials, he sought unsuccessfully the presidency of Harvard College, which had been held by his father Increase, another important Puritan intellectual.
Read more or edit on Wikipedia