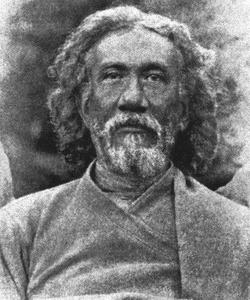 Sri Yukteswar Giri (also written Sriyuktesvara, Sri Yukteshwar) (Devanagari: श्रीयुक्तेश्वर गिरि ) (10 May 1855 – 9 March 1936) is the monastic name of Priya Nath Karar (also spelled as Priya Nath Karada and Preonath Karar), an Indian monk and yogi, and the guru of Paramahansa Yogananda and Swami Satyananda Giri. Born in Serampore, West Bengal, Sri Yukteswar was a Kriya yogi, a Jyotisha (Vedic astrologer), a scholar of the Bhagavad Gita and the Upanishads, an educator, author, and astronomer. He was a disciple of Lahiri Mahasaya of Varanasi and a member of the Giri branch of the Swami order. As a guru, he had two ashrams, one in Serampore and another in Puri, Odisha, between which he alternated his residence throughout the year as he trained disciples.Described by Tibetologist W.Y. Evans-Wentz as being "of gentle mien and voice, of pleasing presence," and with "high character and holiness," Sri Yukteswar was a progressive-minded figure in 19th-century Serampore society; he regularly held religious festivals throughout the year around the towns and at his ashrams, created a "Satsanga Sabha" spiritual study organization, established syllabi for educational institutions, and re-analyzed the Vedic astrological yugas. Noted for his sharp mind and insightful knowledge, he became a respected guru throughout the greater Kolkata area to his Kriya yoga students, and also regularly invited individuals from all social backgrounds to his ashrams to discuss and exchange ideas on a range of topics. As a guru, he was nonetheless known for his candid insight, stern nature and strict disciplinary training methods, as noted by his disciple Yogananda in his autobiography. The rigorous nature of his training eventually prepared his disciples, such as Satyananda and Yogananda himself, for their own intense social work in India and America, respectively. In accordance with the high ideals and "penetrating insight" with which he lived, Sri Yukteswar was considered by Yogananda as a Jnanavatar, or "Incarnation of Wisdom;" Evans-Wentz felt him "worthy of the veneration which his followers spontaneously accorded to him...Content to remain afar from the multitude, he gave himself unreservedly and in tranquility to that ideal life which Paramhansa Yogananda, his disciple, has now described for the ages."
Read more or edit on Wikipedia