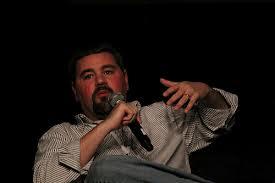 Jonathan Hickman (born September 3, 1972) is an American comic book writer and artist, best known for his creator-owned series The Nightly News, The Manhattan Projects and East of West, as well as his lengthy stints as a writer on Marvel's Fantastic Four, The Avengers and The New Avengers. Hickman's other notable work at Marvel includes the S.H.I.E.L.D. limited series, the creation of the Fantastic Four spin-off title FF, as well as two crossover limited series, Infinity and Secret Wars, both of which acted as centerpieces for the eponymous company-wide crossover storylines. Between 2019 and 2021, Hickman worked on "Dawn of X", a relaunch of various X-Men-related titles for which he provided the core storyline and concepts. He also helped to assemble and coordinate the writers room active during this period.
Read more or edit on Wikipedia