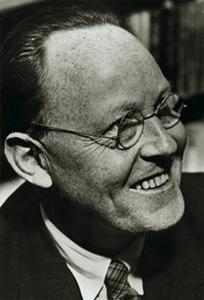 Gunnar Gunnarsson (18 May 1889 – 21 November 1975) was an Icelandic author who wrote mainly in Danish. He grew up, in considerable poverty, on Valþjófsstaður in Fljótsdalur valley and on Ljótsstaðir in Vopnafjörður. During the first half of 20th century he became one of the most popular novelists in Denmark and Germany. One time he went to Germany and had a meeting with Hitler and is considered to be the only Icelander who has met him. Often considered one of the most important Icelandic writers, he wrote the novel Af Borgslægtens Historie (translated into English as Guest the One-Eyed), the first Icelandic writing ever made into a movie. He also wrote the autobiographical novel The Church on the Mountain (1923–28).
Read more or edit on Wikipedia