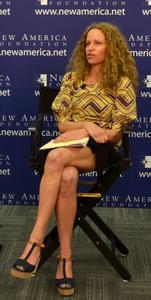 Katie Roiphe (born July 13, 1968) is an American author and journalist. She is best known as the author of the non-fiction examination The Morning After: Fear, Sex and Feminism (1994). She is also the author of Last Night in Paradise: Sex and Morals at the Century's End (1997), and the 2007 study of writers and marriage, Uncommon Arrangements. Her 2001 novel Still She Haunts Me is an imagining of the relationship between Charles Dodgson (known as Lewis Carroll) and Alice Liddell, the real-life model for Dodgson's Alice's Adventures in Wonderland. She is also known for allegedly planning to out the creator of the Shitty Media Men list in an article for Harper's magazine.
Read more or edit on Wikipedia