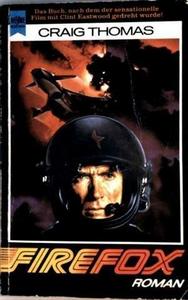 Firefox is a thriller novel written by Craig Thomas and published in 1977. The Cold War plot involves an attempt by the CIA and MI6 to steal a highly advanced experimental Soviet fighter aircraft. The chief protagonist is fighter pilot turned spy Mitchell Gant. The book was subject to a 1982 film adaptation produced and directed by Clint Eastwood who also played the role of Gant in the film.
Read more or edit on Wikipedia