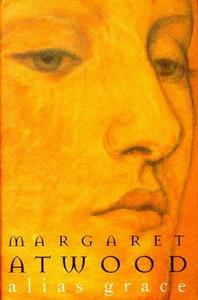 Alias Grace is a novel of historical fiction by Canadian writer Margaret Atwood. First published in 1996 by McClelland & Stewart, it won the Canadian Giller Prize and was shortlisted for the Booker Prize. The story fictionalizes the notorious 1843 murders of Thomas Kinnear and his housekeeper Nancy Montgomery in Canada West. Two servants of the Kinnear household, Grace Marks and James McDermott, were convicted of the crime. McDermott was hanged and Marks was sentenced to life imprisonment.Although the novel is based on factual events, Atwood constructs a narrative with a fictional doctor, Simon Jordan, who researches the case. Although ostensibly conducting research into criminal behaviour, he slowly becomes personally involved in the story of Grace Marks and seeks to reconcile his perception of the mild-mannered woman he sees with the murder of which she has been convicted.Atwood first encountered the story of Grace Marks in Life in the Clearings Versus the Bush by Susanna Moodie. In 1970, she published The Journals of Susanna Moodie, a cycle of poems informed by the published works of Moodie. It became a classic of Canadian literature, as it lyrically evokes the experience of life in the wilderness, immigrant life, and colonial times. Subsequently, Atwood wrote the 1974 CBC Television film The Servant Girl about Grace Marks, also based on Susanna Moodie's account. However, in Alias Grace, Atwood says that she has changed her opinion of Marks, having read more widely and discovered that Moodie had fabricated parts of her third-hand account of the famous murders.
Read more or edit on Wikipedia