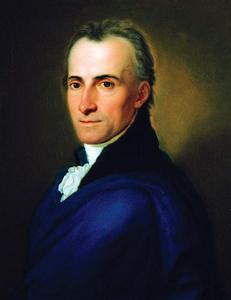 Ferenc Kazinczy (in older English: Francis Kazinczy, October 27, 1759 – August 23, 1831) was a Hungarian author, poet, translator, neologist, the most indefatigable agent in the regeneration of the Hungarian language and literature at the turn of the 19th century. Today his name is connected with the extensive Language Reform of the 19th century, when thousands of words were coined or revived, enabling the Hungarian language to keep up with scientific progress and become an official language of the nation in 1844. For his linguistic and literary works he is regarded as one of the cultural founders of the Hungarian Reform Era along with Dávid Baróti Szabó, Ferenc Verseghy, György Bessenyei, Mátyás Rát and János Kis.
Read more or edit on Wikipedia