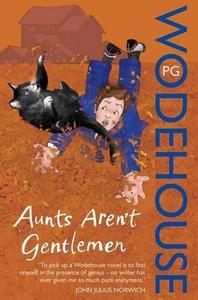 Aunts Aren't Gentlemen is a comic novel by P. G. Wodehouse, first published in the United Kingdom in October 1974 by Barrie & Jenkins, London, and in the United States under the title The Cat-nappers on 14 April 1975 by Simon & Schuster, New York. It was the last novel to feature some of Wodehouse's best known characters, Bertie Wooster and his resourceful valet Jeeves, and the last novel fully completed by Wodehouse before his death. Taking place at a rural town called Maiden Eggesford, the story involves a plan by Bertie's Aunt Dahlia to kidnap a cat so that she can win a wager. The novel also chronicles the relationship between Bertie's acquaintances Orlo Porter and Vanessa Cook, and features Major Plank, whom Bertie first met in Stiff Upper Lip, Jeeves.
Read more or edit on Wikipedia