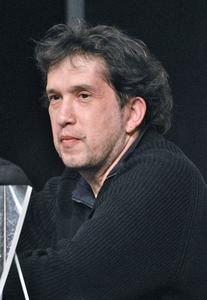 Joan-Lluís Lluís (Perpignan, 1963) is a Catalan writer. His works include five novels and a collection of essays entitled Conversa amb el meu gos sobre França i els francesos (Conversation with my Dog about France and the French, 2002). This last work, which Lluís himself describes as a pamphlet, focuses on the precarious linguistic situation of the Catalans under French administration. He is co-author, with musician Pascal Comelade, of a manifesto published in 1998 by linguistic and cultural activists from Northern Catalonia. His 2004 novel El dia de l'ós (The Day of the Bear) won the prestigious Joan Creixells Prize, and his novel Jo soc aquell que va matar Franco (I'm the one who killed Franco) received the Sant Jordi Award and the Maria Àngels Anglada Prize.
Read more or edit on Wikipedia