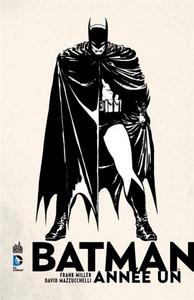 "Batman: Year One" is an American comic book story arc written by Frank Miller, illustrated by David Mazzucchelli, and published by DC Comics. Year One was originally printed as comic books under the title Batman issues #404–407 in 1987. There have been several reprints of the story: a hardcover, multiple trade paperbacks, several deluxe editions in hardcover and paperback format, and an absolute edition. Year One was also adapted into an animated feature in 2011. The story recounts Batman's first year as a crime-fighter as well as exploring the life of recently transferred Gotham police detective James Gordon – eventually building towards their first encounter and their eventual alliance against Gotham's criminal underworld.
Read more or edit on Wikipedia