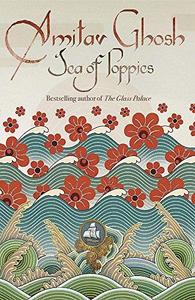 Sea of Poppies (2008) is a novel by Indian novelist Amitav Ghosh which was shortlisted for the Man Booker Prize in 2008. It is the first volume of the Ibis trilogy. In the words of Rajnish Mishra, "the Ibis trilogy is Ghosh's most vehement indictment of the source of imperialism and colonialism". The second volume is River of Smoke. The main characters include Deeti, an ordinary village woman, an "octoroon" American sailor named Zachary Reid, an Indian rajah / zamindar called Neel Rattan Halder, and Benjamin Burnham, an evangelist opium trader. The story is set prior to the First Opium War, on the banks of the holy river Ganges and in Calcutta. The author compares the Ganges to the Nile, the lifeline of the Egyptian civilization, attributing the provenance and growth of these civilizations to these selfless, ever-flowing bodies. He portrays the characters as poppy seeds emanating in large numbers from the field to form a sea, where every single seed is uncertain about its future.
Read more or edit on Wikipedia