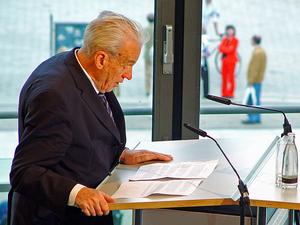 Walter Jens (8 March 1923 – 9 June 2013) was a German philologist, literature historian, critic, university professor and writer.He was born in Hamburg, and attended the Gelehrtenschule des Johanneums from 1933 to 1941, when he gained his Abitur, before studying at the University of Hamburg.In the early 1940s, Jens joined the NSDAP. He denied having applied for membership actively and claimed that he had become a member automatically because he was a member of the Hitler Youth and that he never received a membership card. During World War II, he earned a doctorate in Freiburg with a work about Sophocles' tragedy and habilitated at age 26 with the work Tacitus und die Freiheit (Tacitus and Freedom) at the University of Tübingen.From 1950 onward, he was a member of the Group 47. That year, he had his breakthrough with the novel Nein. Die Welt der Angeklagten.From 1965 to 1988, Jens held the chair for General Rhetoric at the University of Tübingen, which was created in order to keep him at the university. Under the pseudonym Momos, he wrote television reviews for Die Zeit. From 1976 to 1982, he was president of the International PEN center in Germany. From 1989 to 1997, he was president of the Academy of Arts, Berlin, and afterwards he was the honorary president. From 1990 to 1995, he was chairman of the Martin-Niemöller-Foundation.
Read more or edit on Wikipedia