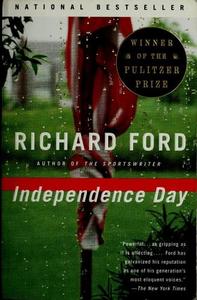 Independence Day is a 1995 novel by Richard Ford and the sequel to Ford's 1986 novel The Sportswriter. This novel is the second in what is now a four-part series, the first being The Sportswriter. It was followed by The Lay of the Land (2006) and Let Me Be Frank With You (2014). Independence Day won the Pulitzer Prize and PEN/Faulkner Award for Fiction in 1996, becoming the first novel ever to win both awards in a single year.
Read more or edit on Wikipedia