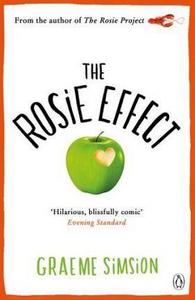 The Rosie Effect is a 2014 novel by Australian novelist Graeme Simsion and a sequel to his debut The Rosie Project. The work was first published on September 24, 2014 in Australia / New Zealand by Text Publishing and the rights have since been sold in 24 other territories. International sales are more than 1 million copies. In the United States the novel was published through Simon & Schuster and in the United Kingdom through Penguin Books. The novel centers on Don Tillman, a socially-awkward genetics professor, and his preparation for fatherhood. .
Read more or edit on Wikipedia