English Protestant theologian and founder of the colony of Providence Plantation

Roger Williams (c. 21 December 1603 – between 27 January and 15 March 1683) was a Puritan minister, theologian, and author who founded Providence Plantations, which became the Colony of Rhode Island. He was a staunch advocate for religious freedom, separation of church and state, and fair dealings with Native Americans, and he was one of the first abolitionists.Williams was expelled by the Puritan leaders from the Massachusetts Bay Colony for spreading "new and dangerous ideas", and he established the Providence Plantations in 1636 as a refuge offering what he called "liberty of conscience". In 1638, he founded the First Baptist Church in America, also known as the First Baptist Church of Providence. He studied the Native American languages and wrote the first book on the Narragansett language, and he organized the first attempt to prohibit slavery in any of England's North American colonies.
Read more or edit on Wikipedia 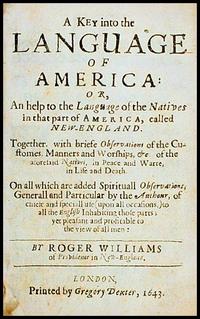 A Key Into the Language of America