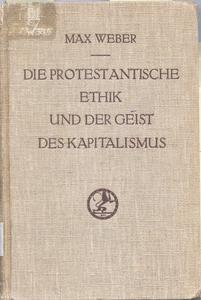 The Protestant Ethic and the Spirit of Capitalism

The Protestant Ethic and the Spirit of Capitalism (German: Die protestantische Ethik und der Geist des Kapitalismus) is a book written by Max Weber, a German sociologist, economist, and politician. Begun as a series of essays, the original German text was composed in 1904 and 1905, and was translated into English for the first time by American sociologist Talcott Parsons in 1930. It is considered a founding text in economic sociology and a milestone contribution to sociological thought in general. In the book, Weber wrote that capitalism in Northern Europe evolved when the Protestant (particularly Calvinist) ethic influenced large numbers of people to engage in work in the secular world, developing their own enterprises and engaging in trade and the accumulation of wealth for investment. In other words, the Protestant work ethic was an important force behind the unplanned and uncoordinated emergence of modern capitalism. In his book, apart from Calvinists, Weber also discusses Lutherans (especially Pietists, but also notes differences between traditional Lutherans and Calvinists), Methodists, Baptists, Quakers, and Moravians (specifically referring to the Herrnhut-based community under Count von Zinzendorf's spiritual lead). In 1998, the International Sociological Association listed this work as the fourth most important sociological book of the 20th century. It is the 8th most cited book in the social sciences published before 1950.
Read more or edit on Wikipedia