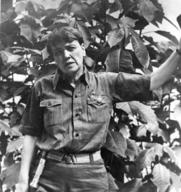 Agnes Smedley (February 23, 1892 – May 6, 1950) was an American journalist, writer, and activist who supported the Indian Independence Movement and the Chinese Communist Revolution. Raised in a poverty-stricken miner's family in Missouri and Colorado, she dramatized the formation of her feminist and socialist consciousness in the autobiographical novel Daughter of Earth (1929). As a college student during World War I, she organized support for the independence of India from the United Kingdom, receiving financial support from the government of Germany. After the war she went to Germany, where she met and worked with Indian nationalists. Between 1928 and 1941, she lived and worked in China, mainly as a journalist. During the first phase of the Chinese Civil War, she was based in Shanghai and published widely in support of the communist cause; later, during the Second Sino-Japanese War, she traveled with the Eighth Route Army and lived for a time in the communist base in Yan'an. In addition to Daughter of Earth, Smedley's publications include four non-fiction books on China; reportage for newspapers in the United States, England, and Germany; and a biography of the Chinese communist general Zhu De. She is accused of being a spy for the Comintern, and working with such agents as Richard Sorge, who was among her lovers. Source: Wikipedia (en)