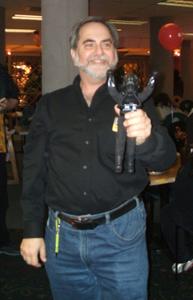 Stephen J. Sansweet (born June 14, 1945) is the chairman and president of Rancho Obi-Wan, a nonprofit museum that houses the world's largest collection of Star Wars memorabilia.Prior to his retirement in April 2011, he was Director of Content Management and head of Fan Relations at Lucasfilm Ltd. for 15 years, and remains Fan Relations Advisor for the company. He is author or co-author of eighteen books, sixteen of them about Star Wars. After Sansweet relocated to Northern California to be closer to his new office at Skywalker Ranch, he bought a former chicken ranch and refurbished its barns to house his collection. The property was renamed Rancho Obi-Wan. In September 2013, his collection of an estimated 300,000 items was recognized by the Guinness Book of Records as being the largest of its kind in the world.
Read more or edit on Wikipedia