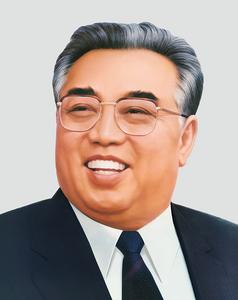 Kim Il-sung (; Korean: 김일성, Korean pronunciation: [kimils͈ʌŋ]; born Kim Sŏng-ju (김성주), 15 April 1912 – 8 July 1994) was a North Korean politician and the founder of North Korea, which he ruled from the country's establishment in 1948 until his death in 1994. He held the posts of Premier from 1948 to 1972 and President from 1972 to 1994. He was also the leader of the Workers' Party of Korea (WPK) from 1949 to 1994 (titled as Chairman from 1949 to 1966 and as General Secretary after 1966). Coming to power after the end of Japanese rule in 1945, he authorized the invasion of South Korea in 1950, triggering an intervention in defense of South Korea by the United Nations led by the United States. Following the military stalemate in the Korean War, a ceasefire was signed on 27 July 1953. He was the third longest-serving non-royal head of state/government in the 20th century, in office for more than 45 years. Under his leadership, North Korea was established as a communist state with a centrally planned economy. It had close political and economic relations with the Soviet Union. By the late 1950s and during the 1960s and 1970s, North Korea enjoyed a higher standard of living than the South, which was suffering from political chaos and economic crises. The situation was reversed in the 1980s, as a newly stable South Korea became an economic powerhouse which was fueled by Japanese and American investment, military aid and internal economic development, while North Korea stagnated and then declined during the same period. Differences emerged between North Korea and the Soviet Union, chief among them was Kim Il-sung's philosophy of Juche, which focused on Korean nationalism, self-reliance and socialism. Despite this, the country received funds, subsidies and aid from the USSR and the Eastern Bloc until the dissolution of the USSR in 1991. The resulting loss of economic aid adversely affected the North's economy, causing widespread famine in 1994. During this period, North Korea also remained critical of the United States defense force's presence in the region, which it considered imperialist, having seized the American ship USS Pueblo in 1968, which was part of an infiltration and subversion campaign to reunify the peninsula under North Korea's rule. Kim outlived his allies Joseph Stalin by four decades and Mao Zedong by almost two decades, and remained in power during the terms of office of six South Korean Presidents and ten US Presidents. Known as the Great Leader (Suryong), he established a personality cult which dominates domestic politics in North Korea. At the 6th WPK Congress in 1980, his oldest son Kim Jong-il was elected to be a Presidium member and chosen to be his successor. Kim Il-sung's birthday is a public holiday in North Korea called the "Day of the Sun". In 1998, 4 years after his death, Kim Il-sung was declared "eternal President of the Republic".
Read more or edit on Wikipedia