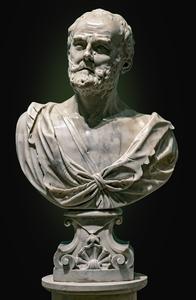 Heraclitus of Ephesus (; Greek: Ἡράκλειτος ὁ Ἐφέσιος, translit. Hērákleitos ho Ephésios, pronounced [hɛː.rá.kleː.tos ho e.pʰé.si.os]; c. 535 – c. 475 BC, fl. 500 BC) was an Ancient Greek, pre-Socratic, Ionian philosopher and a native of the city of Ephesus, which was then part of the Persian Empire. His appreciation for wordplay and oracular expressions, as well as paradoxical elements in his philosophy, earned him the epithet "The Obscure" from antiquity. He wrote a single work, On Nature, only fragments of which have survived, increasing the obscurity associated with his life and philosophy. Heraclitus's cryptic utterances have been the subject of numerous interpretations. He has been seen as a "material monist or a process philosopher; a scientific cosmologist, a metaphysician and a religious thinker; an empiricist, a rationalist, a mystic; a conventional thinker and a revolutionary; a developer of logic—one who denied the law of non-contradiction; the first genuine philosopher and an anti-intellectual obscurantist."Heraclitus was of distinguished parentage but he eschewed his privileged life for a lonely one as a philosopher. Little else is known about his early life and education; he regarded himself as self-taught and a pioneer of wisdom. He was considered a misanthrope who was subject to depression and became known as "the weeping philosopher" in contrast to Democritus, who was known as "the laughing philosopher". Heraclitus believed the world is in accordance with Logos (literally, "word", "reason", or "account") and is ultimately made of fire. He also believed in a unity of opposites and harmony in the world. He was most famous for his insistence on ever-present change—known in philosophy as "flux" or "becoming"—as the characteristic feature of the world; an idea he expressed in the famous saying, "No man ever steps in the same river twice", or with panta rhei ("everything flows"). This aspect of his philosophy is contrasted with that of Parmenides, who believed in "being" and in the static nature of the universe. Both Heraclitus and Parmenides had an influence on Plato, who went on to influence all of Western philosophy.
Read more or edit on Wikipedia 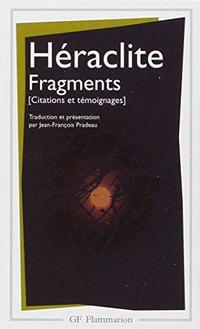