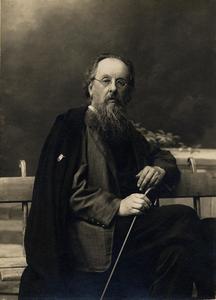 Konstantin Eduardovich Tsiolkovsky (Russian: Константи́н Эдуа́рдович Циолко́вский; 17 September [O.S. 5 September] 1857 – 19 September 1935) was a Russian and Soviet rocket scientist who pioneered astronautic theory. Along with the Frenchman Robert Esnault-Pelterie, the Germans Hermann Oberth and Fritz von Opel, and the American Robert H. Goddard, he is one of the founding fathers of modern rocketry and astronautics. His works later inspired leading Soviet rocket-engineers Sergei Korolev and Valentin Glushko, who contributed to the success of the Soviet space program. Tsiolkovsky spent most of his life in a log house on the outskirts of Kaluga, about 200 km (120 mi) southwest of Moscow. A recluse by nature, his unusual habits made him seem bizarre to his fellow townsfolk.
Read more or edit on Wikipedia