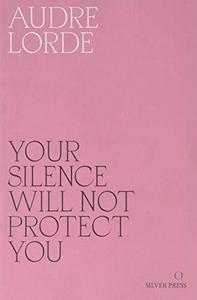 Your Silence Will Not Protect You

Your Silence Will Not Protect You is a 2017 posthumous collection of essays, speeches, and poems by African American author and poet Audre Lorde. It is the first time a British publisher collected Lorde's work into one volume. The collection focuses on key themes such as: shifting language into action, silence as a form of violence, and the importance of history. Lorde describes herself as a "Black, lesbian, mother, warrior, poet", and addresses the difficulties in communication between Black and white women.The collection is made up of five sections: a preface by Reni Eddo-Lodge, an introduction by Sara Ahmed, 13 essays, and 17 poems, and a Note on the Text. As the Note on the Text states, many of the essays in the collection were given as papers at conferences across the U.S. Further, Lorde often revised early poems and re-published them, so many of the poems in this collection are the latest versions of Lorde's work.
Read more or edit on Wikipedia