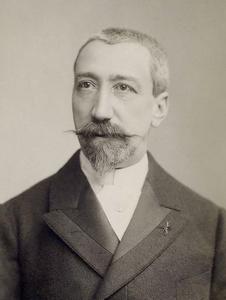 Anatole France (French: [anatɔl fʁɑ̃s]; born François-Anatole Thibault, [frɑ̃swa anatɔl tibo]; 16 April 1844 – 12 October 1924) was a French poet, journalist, and novelist with several best-sellers. Ironic and skeptical, he was considered in his day the ideal French man of letters. He was a member of the Académie française, and won the 1921 Nobel Prize in Literature "in recognition of his brilliant literary achievements, characterized as they are by a nobility of style, a profound human sympathy, grace, and a true Gallic temperament".France is also widely believed to be the model for narrator Marcel's literary idol Bergotte in Marcel Proust's In Search of Lost Time.
Read more or edit on Wikipedia