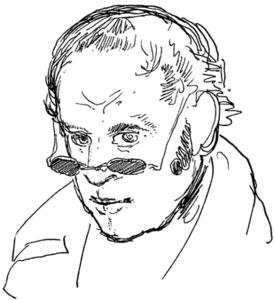 Rodolphe Töpffer ( TOP-fər, French: [ʁɔdɔlf tœpfɛʁ]; 31 January 1799 – 8 June 1846) was a Swiss teacher, author, painter, cartoonist, and caricaturist. He is best known for his illustrated books (littérature en estampes, "graphic literature"), which are possibly the earliest European comics. He is known as the father of comic strips and has been credited as the "first comics artist in history."Paris-educated, Töpffer worked as a schoolteacher at a boarding school, where he entertained students with his caricatures. In 1837, he published Histoire de M. Vieux Bois (published in the United States in 1842 as The Adventures of Obadiah Oldbuck). Each page of the book had one to six captioned cartoon panels, much like modern comics. Töpffer published several more of these books, and wrote theoretical essays on the form.
Read more or edit on Wikipedia