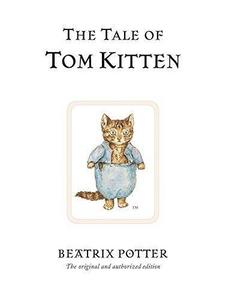 The Tale of Tom Kitten

The Tale of Tom Kitten is a children's book, written and illustrated by Beatrix Potter. It was released by Frederick Warne & Co. in September 1907. The tale is about manners and how children react to them. Tabitha Twitchit, a cat, invites friends for tea. She washes and dresses her three kittens for the party, but within moments the kittens have soiled and lost their clothes while scampering about the garden. Tabitha is "affronted". She sends the kittens to bed, and tells her friends the kittens have the measles. Once the tea party is underway however, its "dignity and repose" are disturbed by the kittens romping overhead and leaving a bedroom in disorder. Potter's career as a children's author and illustrator was launched in 1902 with the release of The Tale of Peter Rabbit. She continued to publish, and, in 1905, bought Hill Top, a farm in Lancashire (now Cumbria), with the sales profits from her books and a small legacy from an aunt. Her tales then took inspiration from the farm, its woodland surroundings, and nearby villages. Work began on Tom Kitten in 1906 and its setting became the Hill Top farmhouse. Illustrations depict the interior of the house and the gardens, paths, and gate at the front of the house. Twenty thousand copies of the book were released in September 1907 and another 12,500 the following December. Potter composed a few miniature letters for child friends as if from the characters in the tale, and, in 1917, she released a painting book under Tom Kitten's name. In 1935, two books of piano pieces and piano duets for children were published with one piece inspired by Tom Kitten and another by the Puddle-Ducks. Tom and other characters in the book have become the subjects of a variety of merchandise over the years including porcelain figurines and plush toys. The tale is still in print, and has been translated and published in several languages.
Read more or edit on Wikipedia

original title: The Tale of Tom Kitten
genre: children's literature
follows: The Story of Miss Moppet
followed by: The Tale of Jemima Puddle-Duck

on Gutenberg.org
on Internet Archive