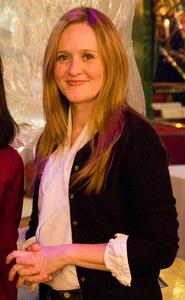 Samantha Anne Bee (born October 25, 1969) is a Canadian-American comedienne, writer, producer, political commentator, actress, and television host. Bee rose to fame as a correspondent on The Daily Show with Jon Stewart, where she became the longest-serving regular correspondent. In 2015, she departed the show after 12 years to start her own show, Full Frontal with Samantha Bee. Bee became a US citizen in 2014, while retaining her Canadian citizenship. In 2017, Time named her one of the 100 most influential people in the world on their annual Time 100 list.
Read more or edit on Wikipedia