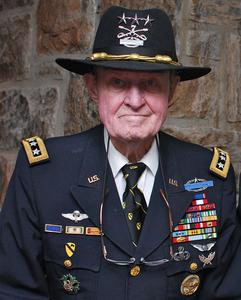 Harold Gregory Moore Jr. (February 13, 1922 – February 10, 2017) was a United States Army lieutenant general and author. He was awarded the Distinguished Service Cross, the U.S. military's second-highest decoration for valor, and was the first of his West Point class (1945) to be promoted to brigadier general, major general, and lieutenant general. Moore is remembered as the lieutenant colonel in command of the 1st Battalion, 7th Cavalry Regiment, at the Battle of Ia Drang in 1965, during the American War in Vietnam. The battle was detailed in the 1992 bestseller We Were Soldiers Once… and Young, co-authored by Moore and made into the film We Were Soldiers in 2002, which starred Mel Gibson as Moore; Moore was the "honorary colonel" of the regiment. Moore was awarded the Order of Saint Maurice by the National Infantry Association as well as the Distinguished Graduate Award by the West Point Association of Graduates.
Read more or edit on Wikipedia