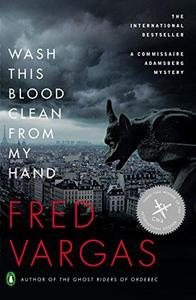 Wash This Blood Clean from My Hand

Wash This Blood Clean From My Hand (French: Sous les vents de Neptune, lit. "Under Neptune's Winds") is a crime novel by French author Fred Vargas, originally published in France in 2004. The novel is part of her Commissaire Adamsberg series. As with many of Vargas' novels in English translation, the English title is not a literal translation. It adroitly chooses a quote from Shakespeare's tragedy Macbeth (Act II, Scene ii, 57-8): "Will all great Neptune's ocean wash this blood clean from my hand?". In 2007 the book won the Crime Writers' Association Duncan Lawrie International Dagger, the second year in a row Vargas won the award (The Three Evangelists having won the previous year). This was the first time an author has been shortlisted for a main CWA Award for three successive novels. Vargas also won the International Dagger award in 2008, the first time an author won the CWA award for three successive novels.
Read more or edit on Wikipedia