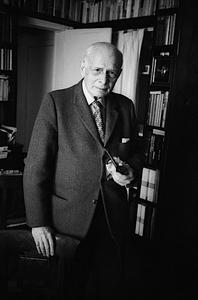 Jacques Michel Gabriel Paul Benoist-Méchin (1 July 1901 – 24 February 1983) was a French far right politician and writer. He was born and died in Paris. Well known as a journalist and historian, he later became prominent for his collaborationism under the Vichy regime. After his conviction in 1947 and release from prison in 1954, he became an Arab world expert in the second part of his life.
Read more or edit on Wikipedia