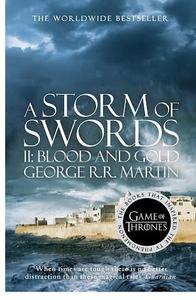 A Storm of Swords

A Storm of Swords is the third of seven planned novels in A Song of Ice and Fire, a fantasy series by American author George R. R. Martin. It was first published on August 8, 2000, in the United Kingdom, with a United States edition following in November 2000. Its publication was preceded by a novella called Path of the Dragon, which collects some of the Daenerys Targaryen chapters from the novel into a single book. At the time of its publication, A Storm of Swords was the longest novel in the series. It was so long that in the UK, Ireland, Australia, Serbia and Israel, its paperback edition was split in half, Part 1 being published as Steel and Snow in June 2001 (with the one-volume cover) and Part 2 as Blood and Gold in August 2001 (with a specially-commissioned new cover). The same division was used in the Polish and Greek editions. In France, the decision was made to cut the novel into four separate volumes. A Storm of Swords won the 2001 Locus Award, the 2002 Geffen Award for Best Novel and was nominated for the 2001 Nebula Award for Best Novel. It was the first novel in the series to be nominated for the Hugo Award, one of the two most prestigious awards in science fiction and fantasy publishing, although it lost to J. K. Rowling's novel Harry Potter and the Goblet of Fire.Meisha Merlin Publishing, which had previously issued limited, illustrated editions of both A Game of Thrones and A Clash of Kings, was planning to release a similar version for A Storm of Swords in two volumes; however, lengthy delays in the release of A Clash of Kings caused it to lose its publishing rights, which were picked up by Subterranean Press. This edition, illustrated by Charles Vess, was released in the summer of 2006. A Storm of Swords is also the name of the second expansion to the board game A Game of Thrones, released in July 2006. Approximately the first half of the novel was adapted for television as the third season of the HBO show Game of Thrones, while the second half became the basis for the series' fourth season, and some elements for the series' fifth season.
Read more or edit on Wikipedia

part of the series: A Song of Ice and Fire
series ordinal: 3
original title: A Storm of Swords
language: English
date of publication: 2000
genre: fantasy
narrative location: World of Ice and Fire
follows: A Clash of Kings
followed by: A Feast for Crows
www.georgerrmartin.com/grrm_book/a-storm-of-swords-a-song-of-ice-and-fire-book-three