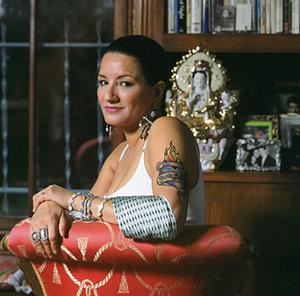 Sandra Cisneros (born December 20, 1954) is an American writer. She is best known for her first novel, The House on Mango Street (1983), and her subsequent short story collection Woman Hollering Creek and Other Stories (1991). Her work experiments with literary forms that investigate emerging subject positions, which Cisneros herself attributes to growing up in a context of cultural hybridity and economic inequality that endowed her with unique stories to tell. She is the recipient of numerous awards, including a National Endowment for the Arts Fellowship, was awarded one of 25 new Ford Foundation Art of Change fellowships in 2017, and is regarded as a key figure in Chicana literature.Cisneros's early life provided many experiences she later drew on as a writer: she grew up as the only daughter in a family of six brothers, which often made her feel isolated, and the constant migration of her family between Mexico and the United States instilled in her the sense of "always straddling two countries ... but not belonging to either culture." Cisneros's work deals with the formation of Chicana identity, exploring the challenges of being caught between Mexican and Anglo-American cultures, facing the misogynist attitudes present in both these cultures, and experiencing poverty. For her insightful social critique and powerful prose style, Cisneros has achieved recognition far beyond Chicano and Latino communities, to the extent that The House on Mango Street has been translated worldwide and is taught in U.S classrooms as a coming-of-age novel.Cisneros has held a variety of professional positions, working as a teacher, a counselor, a college recruiter, a poet-in-the-schools, and an arts administrator, and has maintained a strong commitment to community and literary causes. In 1998 she established the Macondo Writers Workshop, which provides socially conscious workshops for writers, and in 2000 she founded the Alfredo Cisneros Del Moral Foundation, which awards talented writers connected to Texas. Cisneros currently resides in Mexico.
Read more or edit on Wikipedia