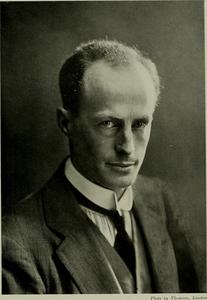 Australian geologist and explorer of the Antarctic (1882-1958)

Sir Douglas Mawson OBE FRS FAA (5 May 1882 – 14 October 1958) was an Australian geologist, Antarctic explorer, and academic. Along with Roald Amundsen, Robert Falcon Scott, and Sir Ernest Shackleton, he was a key expedition leader during the Heroic Age of Antarctic Exploration. Mawson was born in England and came to Australia as an infant. He completed degrees in mining engineering and geology at the University of Sydney. In 1905 he was made a lecturer in petrology and mineralogy at the University of Adelaide. Mawson's first experience in the Antarctic came as a member of Shackleton's Nimrod Expedition (1907–1909), alongside his mentor Edgeworth David. They were part of the expedition's northern party, which became the first to attain the South Magnetic Pole and to climb Mount Erebus. After his participation in Shackleton's expedition, Mawson became the principal instigator of the Australasian Antarctic Expedition (1911–1914). The expedition explored thousands of kilometres of previously unexplored regions, collected geological and botanical samples, and made important scientific observations. Mawson was the sole survivor of the three-man Far Eastern Party, which travelled across the Mertz and Ninnis Glaciers named after his two deceased companions. Their deaths forced him to travel alone for over a month to return to the expedition's main base. Mawson was knighted in 1914 and during World War I worked with the British and Russian militaries. He returned to the University of Adelaide in 1919 and became a full professor in 1921, contributing much to Australian geology. He returned to the Antarctic as the leader of the British Australian and New Zealand Antarctic Research Expedition (1929–1931), which led to a territorial claim in the form of the Australian Antarctic Territory. Mawson is commemorated by numerous landmarks and from 1984 to 1996 appeared on the Australian $100 note.
Read more or edit on Wikipedia