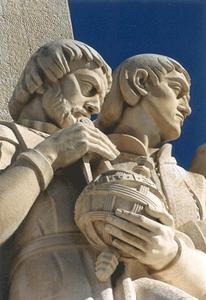 Pedro Nunes (Portuguese: [ˈpedɾu ˈnunɨʃ]; Latin: Petrus Nonius; 1502 – 11 August 1578) was a Portuguese mathematician, cosmographer, and professor, from a New Christian (of Jewish origin) family.Considered one of the greatest mathematicians of his time, Nunes is best known for his contributions to the nautical sciences (navigation and cartography), which he approached, for the first time, in a mathematical way. He was the first to propose the idea of a loxodrome, and was the inventor of several measuring devices, including the nonius (from which Vernier scale was derived), named after his Latin surname.
Read more or edit on Wikipedia

Of the Art of Navigation

Treatise on the Twilight