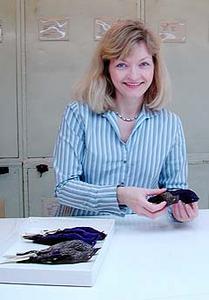 Pamela Cecile Rasmussen (born October 16, 1959) is a prominent American ornithologist and expert on Asian birds. She was formerly a research associate at the Smithsonian Institution in Washington, D.C., and is based at the Michigan State University. She is associated with other major centers of research in the United States and the United Kingdom. Rasmussen's early research investigated South American seabirds and fossil birds from North America. She later specialised in Asian birds describing several new species and clarifying the status of others, particularly white-eyes and owls. More recently, she has been involved in large scale collaborations looking at patterns of global biodiversity, and has assessed the taxonomic status of South Asian vultures. She was the main author of Birds of South Asia: The Ripley Guide, a landmark publication due to its greater geographical and species coverage compared to its predecessors. As a result of her study of museum bird specimens when researching for the book, she was instrumental in unveiling the extent of the theft from museums and fraudulent documentation perpetrated by eminent British ornithologist Richard Meinertzhagen.
Read more or edit on Wikipedia