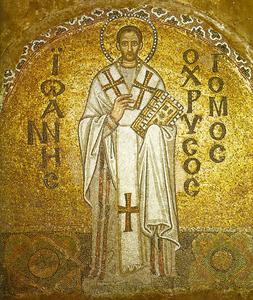 John Chrysostom (; Greek: Ἰωάννης ὁ Χρυσόστομος; c. 347 – 14 September 407) was an important Early Church Father who served as archbishop of Constantinople. He is known for his preaching and public speaking, his denunciation of abuse of authority by both ecclesiastical and political leaders, the Divine Liturgy of Saint John Chrysostom, and his ascetic sensibilities. The epithet Χρυσόστομος (Chrysostomos, anglicized as Chrysostom) means "golden-mouthed" in Greek and denotes his celebrated eloquence. Chrysostom was among the most prolific authors in the early Christian Church, although both Origen of Alexandria and Augustine of Hippo exceeded Chrysostom. He is also credited with the second and final destruction of the Temple of Artemis, one of the Seven Wonders of the Ancient World, by leading a mob. Cyril of Alexandria credited John Chrysostom with destroying the temple, referring to him as "the destroyer of the demons and overthrower of the temple of Diana". A later Archbishop of Constantinople, Proclus, noted the achievements of John, saying "In Ephesus, he despoiled the art of Midas", although there is little evidence to support this claim.He is honoured as a saint in the Oriental Orthodox, Eastern Orthodox, Catholic, Anglican, and Lutheran churches, as well as in some others. The Eastern Orthodox, together with the Byzantine Catholics, hold him in special regard as one of the Three Holy Hierarchs (alongside Basil the Great and Gregory of Nazianzus). The feast days of John Chrysostom in the Eastern Orthodox Church are 14 September, 13 November and 27 January. In the Roman Catholic Church he is recognized as a Doctor of the Church. Because the date of his death is occupied by the feast of the Exaltation of the Holy Cross (14 September), the General Roman Calendar celebrates him since 1970 on the previous day, 13 September; from the 13th century to 1969 it did so on 27 January, the anniversary of the translation of his body to Constantinople. Of other Western churches, including Anglican provinces and Lutheran churches, some commemorate him on 13 September, others on 27 January. John Chrysostom is remembered in the Church of England with a Lesser Festival on 13 September. The Coptic Church also recognizes him as a saint (with feast days on 16 Thout and 17 Hathor).
Read more or edit on Wikipedia

eucharistic liturgy of the Byzantine Rite 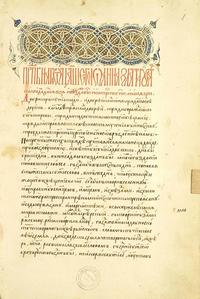