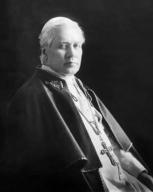 Pope Pius X (Italian: Pio X; born Giuseppe Melchiorre Sarto; 2 June 1835 – 20 August 1914) was head of the Catholic Church from 4 August 1903 to his death in August 1914. Pius X is known for vigorously opposing modernist interpretations of Catholic doctrine, and for promoting liturgical reforms and scholastic theology. He initiated the preparation of the 1917 Code of Canon Law, the first comprehensive and systemic work of its kind. He is venerated as a saint in the Catholic Church and is the namesake of the traditionalist Catholic Priestly Fraternity of Saint Pius X. Pius X was devoted to the Blessed Virgin Mary under the title of Our Lady of Confidence; while his papal encyclical Ad diem illum took on a sense of renewal that was reflected in the motto of his pontificate. He advanced the Liturgical Movement by formulating the principle of participatio actuosa (active participation of the faithful) in his motu proprio, Tra le sollecitudini (1903). He encouraged the frequent reception of Holy Communion, and he lowered the age for First Communion, which became a lasting innovation of his papacy.Like his predecessors, he promoted Thomism as the principal philosophical method to be taught in Catholic institutions. He vehemently opposed various nineteenth-century philosophies which he viewed as an intrusion of secular errors incompatible with Catholic dogma, especially modernism, which he critiqued as the synthesis of every heresy.Pius X was known for his firm demeanour and sense of personal poverty, reflected by his membership of the Third Order of Saint Francis. He regularly gave sermons from the pulpit, a rare practice at the time. After the 1908 Messina earthquake he filled the Apostolic Palace with refugees, long before the Italian government acted. He rejected any kind of favours for his family, and his close relatives chose to remain in poverty, living near Rome. He also undertook a reform of the Roman Curia with the Apostolic Constitution Sapienti consilio in 1908. After his death, a strong cult of devotion followed his reputation for piety and holiness. He was beatified in 1951 and canonized in 1954 by Pope Pius XII. A statue bearing his name stands within St. Peter's Basilica; and his birth town was renamed Riese Pio X after his death. Source: Wikipedia (en)