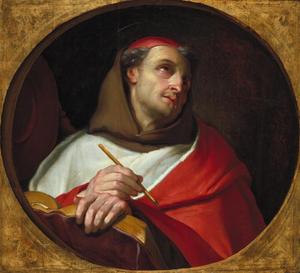 Bonaventure ( BON-ə-ven-chər, -⁠VEN-; Italian: Bonaventura [ˌbɔnavenˈtuːra]; 1221 – 15 July 1274), born Giovanni di Fidanza, was an Italian medieval Franciscan, scholastic theologian and philosopher. The seventh Minister General of the Order of Friars Minor, he was also Cardinal Bishop of Albano. He was canonised on 14 April 1482 by Pope Sixtus IV and declared a Doctor of the Church in the year 1588 by Pope Sixtus V. He is known as the "Seraphic Doctor" (Latin: Doctor Seraphicus). His feast day is July 15. Many writings believed in the Middle Ages to be his are now collected under the name Pseudo-Bonaventure.
Read more or edit on Wikipedia

A historical series of talks