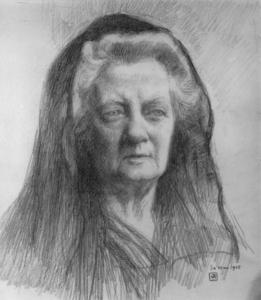 Jane Ellen Harrison (9 September 1850 – 15 April 1928) was a British classical scholar and linguist. Harrison is one of the founders, with Karl Kerenyi and Walter Burkert, of modern studies in Ancient Greek religion and mythology. She applied 19th-century archaeological discoveries to the interpretation of ancient Greek religion in ways that have become standard. She has also been credited with being the first woman to obtain a post in England as a ‘career academic’. Harrison argued for women's suffrage but thought she would never want to vote herself. Ellen Wordsworth Crofts, later second wife of Sir Francis Darwin, was Jane Harrison's best friend from her student days at Newnham, and during the period from 1898 to her death in 1928.
Read more or edit on Wikipedia