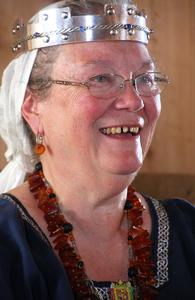 Diana Lucile Paxson (born February 20, 1943) is an American author, primarily in the fields of Paganism and Heathenism. Her published works include fantasy and historical fiction novels, as well as numerous short stories. More recently she has also published books about Pagan and Heathen religions and practices. She is a founder of the Society for Creative Anachronism, where she is known as Diana the Listmaker.
Read more or edit on Wikipedia