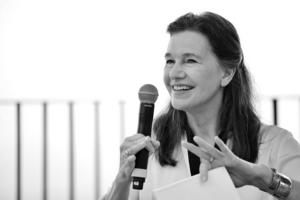 writer from the United States

Louise Erdrich ( ER-drik; born Karen Louise Erdrich, June 7, 1954) is an American author of novels, poetry, and children's books featuring Native American characters and settings. She is an enrolled member of the Turtle Mountain Band of Chippewa Indians, a federally recognized tribe of the Anishinaabe (also known as Ojibwa and Chippewa).Erdrich is widely acclaimed as one of the most significant writers of the second wave of the Native American Renaissance. She has written 28 books in all, including fiction, non-fiction, poetry, and children's books. In 2009, her novel The Plague of Doves was a finalist for the Pulitzer Prize for Fiction and received an Anisfield-Wolf Book Award. In November 2012, she received the National Book Award for Fiction for her novel The Round House. She is a 2013 recipient of the Alex Awards. She was awarded the Library of Congress Prize for American Fiction at the National Book Festival in September 2015. In 2021, she was awarded the Pulitzer Prize for Fiction for her novel The Night Watchman.She was married to author Michael Dorris and the two collaborated on a number of works. The couple separated in 1995. She is also the owner of Birchbark Books, a small independent bookstore in Minneapolis that focuses on Native American literature and the Native community in the Twin Cities.
Read more or edit on Wikipedia