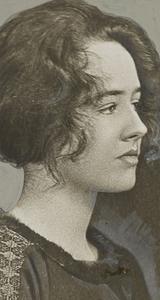 Anne Spencer Morrow Lindbergh (June 22, 1906 – February 7, 2001) was an American author and aviator. She was the wife of decorated pioneer aviator Charles Lindbergh, with whom she made many exploratory flights. Raised in Englewood, New Jersey, and later New York City, Anne Morrow graduated from Smith College in Northampton, Massachusetts in 1928. She married Charles in 1929, and in 1930 became the first woman to receive a U.S. glider pilot license. Throughout the early 1930s, she served as radio operator and copilot to Charles on multiple exploratory flights and aerial surveys. Following the 1932 kidnapping and murder of their eldest child, Anne and Charles moved to Europe in 1935 to escape the American press and hysteria surrounding the case, where their views shifted during the preliminary time of World War II towards an alleged sympathy for Nazi Germany and a concern for the United States’ ability to compete with Germany in the war with their opposing air power. When they returned to America in 1939, the couple supported the isolationist America First Committee before ultimately expressing public support for the U.S. war effort after the 1941 Japanese attack on Pearl Harbor and subsequent United States declaration of war upon Germany. After the war, she moved away from politics and wrote extensive poetry and nonfiction that helped the Lindberghs regain their reputation, which had been greatly damaged since the days leading up to the war. She authored the popular Gift from the Sea (1955), that appears to foreshadow the green movement, and became an inspirational figure for many American women. According to Publishers Weekly, the book was one of the top nonfiction bestsellers of the 1950s. After suffering a series of strokes throughout the 1990s that left her disoriented and disabled, Anne died in 2001 at the age of 94.
Read more or edit on Wikipedia