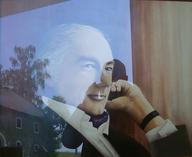 Nicolaas Thomas Bernhard (German: [ˈtoːmas ˈbɛʁnhaʁt]; 9 February 1931 – 12 February 1989) was an Austrian novelist, playwright and poet who explored death, social injustice, and human misery in controversial literature that was deeply pessimistic about modern civilization in general and Austrian culture in particular. Bernhard's body of work has been called "the most significant literary achievement since World War II." He is widely considered to be one of the most important German-language authors of the postwar era. Source: Wikipedia (en)