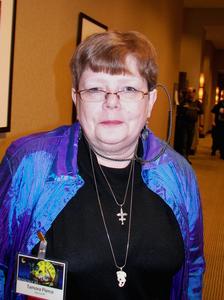 American writer of fantasy novels for children and adults

Tamora Pierce (born December 13, 1954) is an American writer of fantasy fiction for teenagers, known best for stories featuring young heroines. She made a name for herself with her first book series, The Song of the Lioness (1983–1988), which followed the main character Alanna through the trials and triumphs of training as a knight. Pierce won the Margaret A. Edwards Award from the Young Adult Library Services Association (YALSA) of the American Library Association in 2013, citing her two quartets Song of the Lioness and Protector of the Small (1999–2002). The annual award recognizes one writer and a particular body of work for "significant and lasting contribution to young adult literature".Pierce's books have been translated into twenty languages.
Read more or edit on Wikipedia