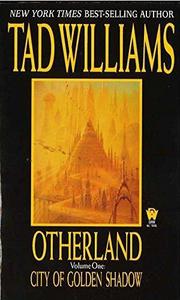 City of Golden Shadow, originally published as Otherland, is a science fiction novel by American writer Tad Williams, the first book in his Otherland series. The "Otherland" refers to a virtual world or worlds and the "City Of Golden Shadow" is a city in the Otherland network to which the main characters are being summoned. The novel tells the story of a frightening virtual network created by a group of rich men known as The Grail Brotherhood. These men include: Felix Jongleur, who was a child at the time of the First World War and is currently the world's oldest man; Jiun Biao, a Chinese economist described as "the terror of Asia"; and Robert Wells, the owner of Telemorphix, the world's largest telecommunications company. The book tells the story of a group of ordinary people who are drawn into the network to stop them.
Read more or edit on Wikipedia