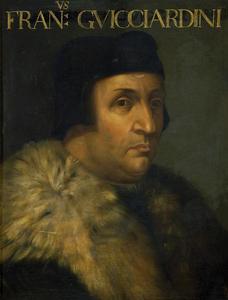 Francesco Guicciardini (Italian: [franˈtʃesko ɡwittʃarˈdiːni]; 6 March 1483 – 22 May 1540) was an Italian historian and statesman. A friend and critic of Niccolò Machiavelli, he is considered one of the major political writers of the Italian Renaissance. In his masterpiece, The History of Italy, Guicciardini paved the way for a new style in historiography with his use of government sources to support arguments and the realistic analysis of the people and events of his time.
Read more or edit on Wikipedia